What is Spirulina: Health Benefits and Side Effects

Health Benefits and Side Effects Spirulina

125
SHARES
ShareTweet
"Test yourselves if you are in the faith; examine yourselves!" - Bibel, 2 Cor. 13:5 10 Questions to Examine and Test Your Faith in GodTest Yourself Now
Reading Time: 3 minutes

A blue-green algae that forms in freshwater lakes in consistently warm environments.
It is a cyanobacterium which consists of two species of bacteria: Arthrospira platensis, which is native to Africa, Asia and South America and Arthrospira maxima which comes from Central America.
It is now cultivated across the world and comes in a three main forms: flakes, powder and tablets.
Spirulina is considered both a dietary supplement and a health food.
It was consumed by both the Aztecs and Mesoamericans up to the 16th century in the Mexico region, but was rediscovered in the 1960ʼs and has been growing in popularity ever since. Until recently this was mainly confined to the dietary supplement world, but its appeal has since broadened and it is now available in most health food shops too.

Spirulina contains up to 5 times more protein than meat – up to 65% in some instances, and contains as many as 100 different nutrients including many vitamins, potassium, copper, iron, selenium, zinc and magnesium.
It is one of the few products that contains all the essential amino acids, as well as five times more beta-carotene than carrots.
As a plant protein is has smaller amounts of methionine, cysteine and lysine than meat, but the levels are still higher than other plant protein.
There is evidence that consuming spirulina may help to prevent heart and liver damage as well as many other health benefits. 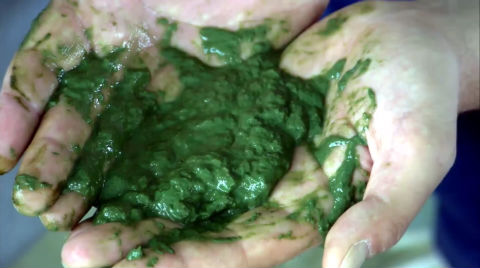 So far medical tests have reported no harmful or toxic effects to humans from the consumption of spirulina. However, some reactions have been noted anecdotally.
Stomach aches have been reported, as have mild itches and rashes.
These are more likely to be caused by contaminated batches which contain other similar-looking algae which are not suitable for human consumption. This highlights a problem with the variable quality of spirulina production around the world.
There is a loophole in US law at present that means that as it is considered a dietary supplement it is not subject to the same safety standards and regulations as a food.
You may experience increased thirst when consuming higher doses. You should try to drink at least 500mls of extra water per day when taking it. This is because your body needs that to help absorb the high levels of protein in it.
People with hyperthyroidism should avoid taking spirulina, as it has high level of iodine which can make this condition worse.
Those with allergies to seafood or seaweed should not take spirulina.
The supplement is not recommended for anyone with a fever as the high protein levels in it can raise the body temperature.
It is also not recommended for kidney patients as it has so many vitamins and minerals that filtering them can put a strain on that organ.
There are also reports that high doses can cause indigestion and constipation and may create unacceptable levels of heavy metals in the body.
Lead, mercury and arsenic have been found in some supplements from China.
Despite all these warning, it should be repeated that no medical tests have found Spirulina to be toxic or harmful to humans.

As it often comes in the from of a fine powder, Spirulina works best as an addition at the end of cooking, or in raw foods. Itʼs ideal in smoothies and dips. Many people like to blend it with fruits and yoghurt to create desserts or refreshing drinks – although it is recommended to add the spirulina after blending.
Savoury recommendations include adding it to salsa, guacamole and hummus.
It adds an intense colour to all these dishes, but you should be aware that the more it is cooked, the less nutrients will make it into your system.

The most effective and direct way to take it is by simply adding water to the powder and drinking it. Some people do not like the noticeable taste and smell of seaweed that it produces – so some people counteract this with fruit juice.
It seems certain that spirulina is set to only become more popular over time, and itʼs reputation as a superfood keeps growing.

125
SHARES
ShareTweet
"Test yourselves if you are in the faith; examine yourselves!" - Bibel, 2 Cor. 13:5 10 Questions to Examine and Test Your Faith in GodTest Yourself Now