Chia Seeds Benefits and Side Effects

20
SHARES
ShareTweet
"Test yourselves if you are in the faith; examine yourselves!" - Bibel, 2 Cor. 13:5 10 Questions to Examine and Test Your Faith in GodTest Yourself Now
Reading Time: 3 minutes 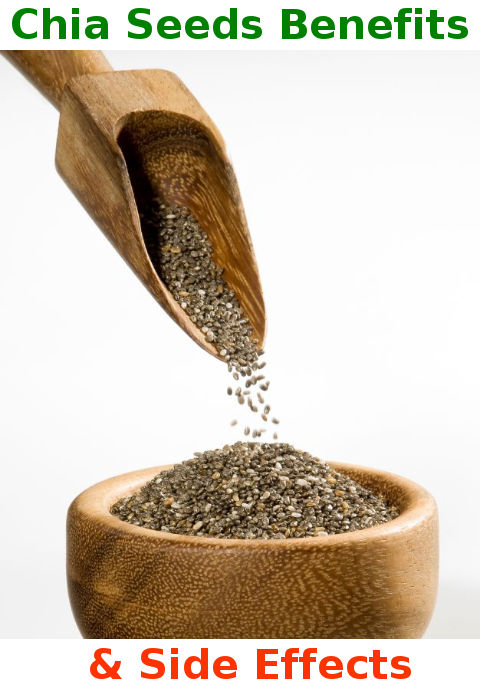 
Chia seeds come from a species of flowering plant called Salvia Hispanica. It is native to Mexico and Guatemala and is supposed to have been cultivated as a food source by the Aztecs in pre-Columbian times. In fact the name chia has a little mystery attached to it, as it comes either from the world for “oily” in the central Mexican Nahuan langauge, or from the Mayan word for “strength”. Either way, both are accurate descriptions of the nutritional punch these little seeds deliver.

The seeds themselves are small, around 1mm in diameter and range in colour from greyish brown to black and white.

They can be eaten raw or cooked but a slightly more unusual property of the chia seed is that it can absorb large quantities of liquid. This is often water, but fruit juice can also be used.

They have a mild nutty taste, which tends to complement rather that over power the foods they are added to.

High levels of Omega-3 – these fats are important in maintaining a healthy metabolism, and there is also evidence that work against inflammation, hypertension and dementia. They may also lower blood pressure.

Easily metabolised by the body – unlike the nutritionally similar flaxseed which needs to be ground before consumption.

Hydration – Chia seeds can absorb up to ten times their own weight inwater, which gives them a gel-like consistency.

Nutrition – chia seeds are approximately 38% fibre, and 16% protein,with low levels of saturated fat – around 3%. They are low in cholesterol and sodium and high in minerals such as calcium, manganese and phosphorus. The minerals help with hypertension and energy metabolism.

Antioxidants – The high levels of antioxidants such as kaempferol andchlorogenic acid in chia seeds has many benefits. Firstly it means you get the benefits of protection against free radicals, which can mean a slightly reduced chance of heart disease and cancer amongst other diseases. It also means that chia seeds have a very long shelf life. They can happily last over a year outside the fridge.

Feeling full for longer – Chia has a combination of fibre and proteinwhich, along with their water absorbing property, all adds to a long lasting satiating effect after eating.

Diabetes – Chia can reduce high levels of insulin in the blood, and canlower resistance to insulin. You should however, always check with a doctor before trying out these kind of medical attributes in food.

Lowering Cholesterol – When chia seeds are used as a source of fat inyour diet, they can lower cholesterol and triglyceride levels. When used in place of other fat sources, there is evidence that chia seeds can reduce fat levels in the body.

Amino Acids – Chia contains 8 amino acids, which are essential to thebody for breaking down food into energy, or synthesising proteins. 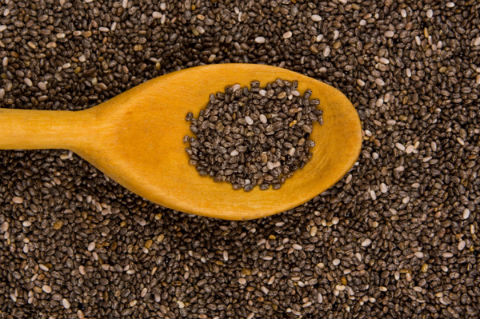 Although chia seeds can be added to baked products such as breads and biscuits, it is more common to add them to food that has already been prepared. They can be used as a topping on fruit smoothies and yoghurts to add texture to them. For savoury uses they can be added to vegetable and rice dishes, to which they add a slight nutty flavour.

Side effects of eating chia

A few possible side effect of eating chia have been identified, although not yet proven.

The most serious is that some people with allergies to mustards seeds have reported a similar reaction to chia.

Also, caution needs to be advised if you are using medicines for lowering blood pressure, as chia seeds may decrease it further.

Also if you are taking vitamin or mineral supplements you need to be careful not to have too much chia on top of these, to avoid taking too much.

Some people have reported bloating sensations after eating chia seeds, but again this is has certainly not affected most consumers.

On the whole though, chia seeds have a growing reputation amongst health food experts as an overlooked superfood, and with more and more suppliers stocking it, it’s popularity is sure to grow more over the coming years.

20
SHARES
ShareTweet
"Test yourselves if you are in the faith; examine yourselves!" - Bibel, 2 Cor. 13:5 10 Questions to Examine and Test Your Faith in GodTest Yourself Now